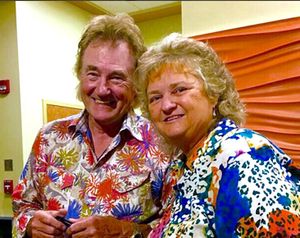 The venue is a public/private partnership of sorts, where the town of Rocky Mount works with a variety of promoters and hosts their own shows at the Center as well. An abandoned retail property was converted for live shows just across from the town’s farmer’s market, and they now have two separate show venues in the same building. Rocky Mount is located roughly between Roanoke and Martinsville, and The Harvester draws concertgoers from all over southwestern Virginia to several shows each week, with many bluegrass and acoustic artists among them.

Lorraine’s show on July 15 contained material from her several albums with Carolina Road, like That’s Kentucky, which set a record for consecutive weeks at #1 on our Bluegrass Today Weekly Airplay Chart, plus a number of Raven’s many country hits. A big number for both of them was their collaboration from Carolina Road’s latest album, Country Grass, with Eddy singing his #1 hit from 1984, I’ve Got Mexico. Other Raven hits done bluegrass style at the show included Operator, Operator, I Should Have Called, Thank God for Kids, Shine, Shine, Shine, Good Morning, Country Rain, I Should Have Called, In a Letter to You, and Bayou Boys.

“It is such an honor to perform live with Eddy Raven,” said Lorraine Jordan. “His songs bring an added dimension to the sound of Carolina Road and we enjoy taking the stage with him each and every time we are fortunate enough to collaborate! We have just gone in the studio with Eddy and are excited about our next upcoming collaboration.”

Her fans from the Raleigh, NC area put together a bus tour to attend this special show. Paula Anderson leased the bus and arranged for them all to also stop in Mt. Airy, NC for a quick tour.

“I was so excited to bring a bus full of bluegrass fans to see this show in Virginia and stop in ‘Mayberry’ too,” Anderson said. “Eddy Raven and Lorraine Jordan have chemistry on stage that makes for a great show and we all enjoyed it so much!”

Lorraine said that additional joint performances with Eddy Raven are being scheduled. Full details will be posted on her web site.